Activism is Needed to Reinvigorate the Tuberculosis Innovations Frontier

Is activism the missing ingredient in development of TB diagnostic and treatment tools? In this blog we compare and contrast the TB activism with that for HIV/AIDS to foster discussion on revitalizing advocacy campaign for TB control.

Care for an airborne infection that causes millions of deaths annually is in need of pro-active advocacy campaigns to stimulate innovation. The World Health Organization’s 2014 report highlights key statistics on the impact of tuberculosis at large. In 2013, 9 million TB cases were detected, including 1.1 million HIV positive cases. In 2013, TB caused 1.5 million deaths, including 360,000 who were HIV-positive. These numbers should trigger a sense of urgency in itself, but the more alarming fact according to the report is that TB has become a chronic and bitter reality for developing nations; over 95% of TB deaths occur in low- and middle-income countries. Advocacy groups and the global community need to reorient policies towards providing sustainable health solutions for high-TB burden resource-constrained countries.

The overarching need is to contextualize the ground situation in high-burden countries to assess their needs for TB control. Advocacy groups for tuberculosis, like Treatment Action Group, have raised concerns about development gaps for TB in the realms of diagnosis and treatment. However, the focus has not shifted towards institutional development in high-burden countries for diffusion of innovations and subsequently, coming up with indigenous solutions for TB control.

Activist groups and organizations for tuberculosis can take a leaf out of HIV’s activism book. Humanitarian organizations, celebrities and civil society at large have rallied for the cause of HIV/AIDS control and the efforts have shown fruition in terms of stimulating generic manufacturing of medicines and driving down the first-line regimen prices. Global community mobilization for fight against TB can prove instrumental in accelerating the progress in this fight. Advocacy groups can highlight a range of issues that hamper the progress in development of TB diagnostic tools and treatment drugs. Funding gaps in TB can prove to be a major roadblock with negative feedback effects in terms of lack of resources for investment in basic science, drug development, clinical trials and operational research for TB research and development. Activists in high-TB burden countries can encourage and foster indigenous drug development for the disease, like India did for Cipla. Furthermore, activists can call for market interventions that can help bring down prices of innovations and increase their accessibility. Lessons can be learned from Medicine Patents Pool for encouraging voluntary licenses for generic manufacturers.

Inadequate funding and insufficient media coverage of tuberculosis are evident. According to David Gold of Global Health Strategies, the relatively small TB response is demonstrated primarily through scant funding and minimal media attention. In 2008, for example, the Global Fund granted $327 million for TB, or 11% of its total funding, with the rest going to malaria and HIV. During the same time, HIV and TB claimed nearly 2 million lives each. This disproportionate funding needs to be highlighted by the activists to influence the donors and policy makers to revisit the spending patterns on the basis of the detrimental impact caused by an epidemic.

The statistics for media attention towards tuberculosis does not help the cause either. Gapminder assessed the frequency of news reports regarding swine flu and tuberculosis respectively from 24 April to 6 May 2009. During this time 31 people died of swine flu, with 253,442 reports being written about the virus, while 63,066 people died of tuberculosis, with only 6,501 news reports mentioning the disease. The news-to-death ratio based on these findings is 8176:1 for H1N1, and 0.1:1 for tuberculosis. This significant disparity needs to be highlighted, if not lessened, with proactive policies of activists and advocacy groups. A Global Health Solutions analysis of TB in the media, assessing news reports from August 2006-April 2009, found that the majority of tuberculosis-focused articles were written during World TB Day or international lung conferences, often focusing on drug access and research, and diagnostics. Activists need to highlight the predominant issues more effectively and more frequently to create impact across the global for fight against TB. 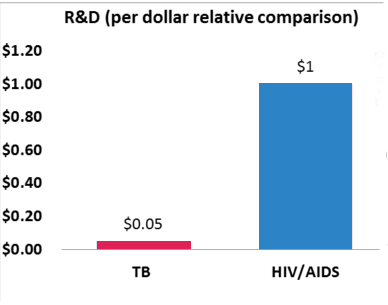 Much can be learned from the pro-active activism for the cause of HIV/AIDS. While it is difficult to establish causality, HIV/AIDS activism has translated into numerous positive outcomes for HIV/AIDS diagnosis and treatment. Salman Keshavjee highlighted the active participation of the HIV community to influence policies and derive solutions in his recent Huffington Post article. The voices of the real TB community -- those suffering from this disease and their families, communities, and local advocates -- are rarely heard. People living with HIV and their friends and their communities are loud and clear, from ACT UP to super stars like Elton John; patients are part of the discussion and help frame the solution. On the contrary, people living with tuberculosis are not highlighted by the media and the limelight evades them. The lack of participation by TB community means that the predominant issues in TB control are put on the backburner.

Activism may rightly be considered the impetus behind increased spending on HIV/AIDS research. Dr. Fauci contrasted the recent history of HIV and TB research, demonstrating the extent to which TB research has lagged behind that for HIV/AIDS. He credited activism as being the driving force behind HIV/AIDS research, leading the US NIH to invest US$39 billion cumulatively in R&D since the early 1980s. These resources have generated over 200,000 published studies, leading to more tools to diagnose and treat HIV than are available for the rest of viral diseases combined. In just a few decades, activism transformed HIV/AIDS from a new disease — with no history, no treatment and no cure — to what’s now become a chronic illness for those living in wealthy countries. On the contrary, relatively lackluster advocacy efforts for TB control mean that the future of this epidemic primarily relies on obsolete diagnostic and treatment techniques.

Peter Small of the Bill and Melinda Gates Foundation aptly highlights the problem, writing: “The remarkable fact is that global control of tuberculosis, a disease that kills someone every 20 seconds, depends upon a 125-year-old test, an 85-year-old vaccine and drugs that take six months to cure and haven’t changed in four decades.” Active community mobilization for the fight against TB can transform the prevalent diagnostic and treatment landscape, and can achieve remarkable success similar to that of HIV/AIDS. If nothing else, a comprehensive advocacy campaign should aim to convey a sense of urgency to innovators, donors, policy-makers and TB community at large. The predominant reasons behind the lack of progress in TB diagnostic and treatment tools need to be highlighted and the pressing needs to be communicated effectively for reformation in resource allocation and utilization for TB control.

Innovation with Incentives: An overview of economic tools to change health behaviors