By Val Ulep and Oscar Picazo

From Brazil to Bangladesh, CHMI partners have landscaped more than 20 countries for promising and proven approaches to improving health systems. In particular, the Philippines has emerged as a center of government-led innovation. Our partners at the Philippine Institute for Development Studies (PIDS) have identified 79 programs working to improve the quality, affordability, and accessibility of healthcare for low income and vulnerable communities. Of these programs, 36 receive support from government entities. We asked PIDS’s Oscar Picazo and Val Ulep to shed light on the role of government in supporting health innovation.

The government’s role in health innovation 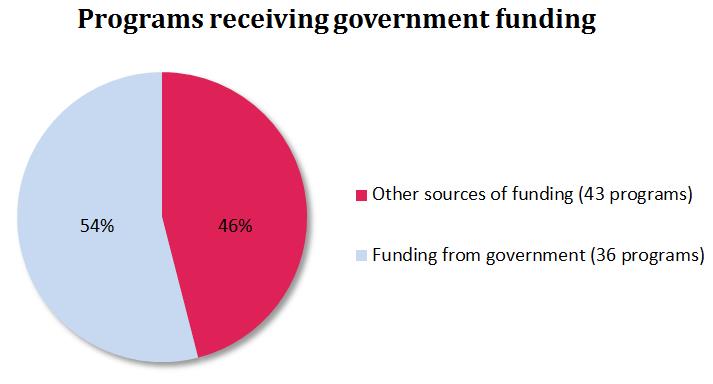 The programs we profile for CHMI are exciting, pioneering, groundbreaking, and trail-blazing. Even if they are modest in scale at present, we believe the innovations we’ve profiled have demonstrated a significant potential for rippleeffects. The government takes an active role in stimulating and scaling up innovation in the Philippines—a role that, as we have written before, is critical. With its vast regulatory powers, government can nurture a suitable business environment for the private sector to participate in innovation development and implementation. Government should neither be restrictive nor bureaucratic.

Many of the 79 innovative health programs we’ve identified since 2010 focus on health challenges common to the Philippines and many other low- and middle-income countries. These include: 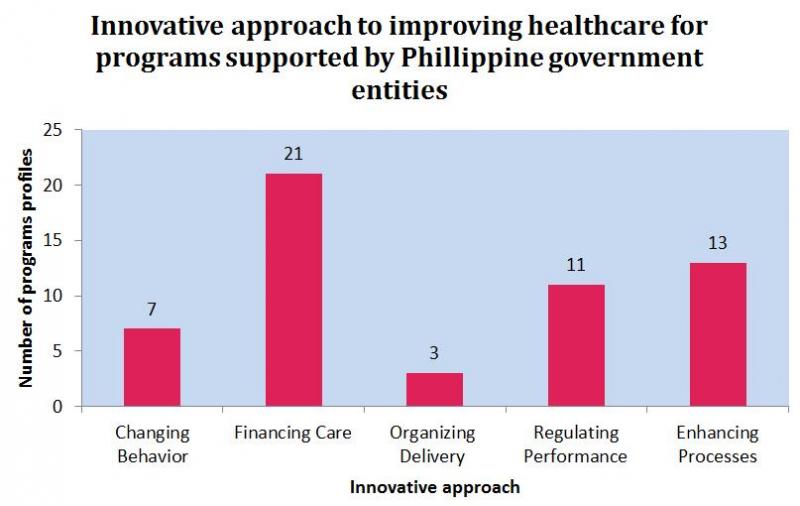 Below, we detail the ways in which government is working to address these health system challenges through its support for health market innovations.

With the government health provider ratio on the decline, innovative programs are harnessing private providers to deliver quality maternity services, with government stepping up to finance care.

Of the 36 government-funded programs, 7 focus on maternal and child health or family planning. PhilHealth upped its maternity coverage package in 2009, covering 6,500 pesos now between the provider and facility, including pre- and post-natal services as well as room and board, medicines, diagnostics and professional fees.

With revenue assured by this program, a public-private partnership started in Leyte Province has helped convert 60 formerly abandoned government health posts in 11 provinces into accredited birthing centers. KaKaK Foundation repairs, renovates, and equips these barangay health posts to create Mother Bles Birthing Clinics. The nonprofit also administers supplies and logistics and liaisons with private practicing midwives.  Midwives receive financial payments for each birth attended at these facilities, providing an incentive to recruit women in the community to deliver in clinics rather than at home with traditional birth attendants. Finally, KaKaK helps enroll pregnant women with PhilHealth.

Launched in 1997, Well-Family Midwife Clinics - which offers franchisee midwives a range of ﬁnancial, business, training, and quality assurance services - includes 132 outlets in 20 provinces. According to the Social Franchising for Health team at UCSF, 95% of franchisees were accredited with PhilHealth in 2012.

Target: Out of pocket spending

Of the 21 government-supported programs that finance care for the poor, 12 are insurance programs, with many launched under the PhilHealth umbrella. Some programs work to expand coverage, such as Kasapi (now known as iGroup), launched in 1995 to cover self-employed workers like taxi drivers, and Remittance-by-Air, launched in 2009 to facilitate payment of premiums via mobile phones. Many programs focus on the poor, like the Pinoy Health Pass PhilHealth set up with GlaxoSmithKline, and the Revolving Drug Insurance Fund implemented in partnership with GIZ which allows low-income PhilHealth members to purchase medication from private pharmacies for a minimal copayment.

Other programs seek to increase members’ utilization of coverage. PhilHealth targets universal health coverage and purports to have enrolled 79% of the population in 2013, but some members are not aware that they are enrolled. Initiated by PhilHealth Region VIII, PhilHealth Link provides a call center for members to stimulate greater usage of benefits; the program is paid for by provincial government units seeking to maximize PhilHealth reimbursements. Since 2010, PhilHealth Link has received 51,680 inquiries, and several of the region’s hospitals have reported significant increases in members using PhilHealth benefits. At Calbayog District Hospital, the rate of patients paying for services through PhilHealth increased from less than 1% in 2010, prior to the program, to 60% in six months of 2011. The program may also be a boon for private facilities, which make up 60% of all hospitals accredited with PhilHealth.

Chronic kidney disease now afflicts one in 10 Filipinos. To marshal resources to address expensive long-term care for this and other chronic diseases, the current government is tapping into existing resources in the private sector and introducing efficiency-enhancing incentive structures not present in pure public ownership and management.

Government-owned hospitals in the Philippines like the National Kidney Transplant Institute, Southern Philippines Medical Center and La Union Medical Center were able to work with private partners to expand their services without compromising their equity goal.

The National Kidney Hospital – contracted to Fresnius Medical Care Phil - is one of the earliest and largest public-private partnerships of its kind in emerging markets. The National Kidney Hospital brought together the complementary strengths of the government and the private sector to achieve the common social goal of alleviating the pain of end-stage renal disease. Fresenius provides state-of-the-art machines for patients. Hemodialysis treatment costs USD $75, compared to other privately owned or government hospitals where treatment can cost more than $350. The cost structure has worked well in that its earnings, about $6.2 million in 2012, have been sufficient to sustain the operating, direct, and indirect costs of dialysis treatment in order to improve the facility and services. PhilHealth has evaluated the hospital, which performed more than 45,000 treatments in 2012, as a Center of Excellence.

While government creates many opportunities by supporting market-driven innovation, state entities must also navigate risks. For example, when a government body implements a scheme and a private entity provides technical support, schemes are vulnerable to political transience and higher direct costs.

However, it’s clear that with so much potential, government could play a much greater role in accelerating the scale up of innovative health programs. Some of the problem is due to limited awareness about schemes other entities are trying out; thus, PIDS has stepped in to disseminate knowledge about these and many other programs through forums like the Galing Likha-Kalusugan Awards. What’s more, we would strongly recommend fast-tracking the creation of Department of Health policies covering innovative business processes such as consignments and PPPs. These policies will not only officially acknowledge these schemes as solutions to health system problems, but foster the necessary regulatory environment for proper implementation and adoption of innovations.

Photo: A young mother pays for medicine at the Best Care Pharmacy, a partner of Friendly Care; Shaw Area Service Center, one of two initial Friendly Care clinics in the Philippines. © 2000 Joseph Fortin, Courtesy of Photoshare