Insights on the Social Franchising Compendium 2014

For the past six years, the Global Health Group at The University of California, San Francisco has been surveying clinical social franchising programs around the world to learn about their scale, where and how they work, what services they specialize in, who they serve, and what their health impact is. This year, after conducting an extensive search to identify new and defunct programs, we learned there were over 90 programs in operation. We received program data from 58 of them, and reported findings in the Clinical Social Franchising Compendium, 2013. (You can also learn about our data collection and analysis process there).

What the data says:

It’s not just the number of programs that has changed, though. Programs have also grown well beyond the health service areas and implementation models that dominated the landscape just 10 years ago.

In 2008, all programs with available data (n=31) reported that they offered family planning services. Eighteen (58%) also offered sexual and reproductive health services (not including services for HIV or AIDS), and 13 offered services for maternal, newborn and child health.

In 2013, 54 of 58 programs with available data offered family planning services and 20 offered sexual and reproductive health (SRH) services (not including services for HIV or AIDS).

When the sexual reproductive health (SRH) and maternal, neonatal, and child health (MNCH) data is disaggregated by specific type of service, we find that at least 13 programs offer safe abortion care services and 19 offer post-abortion care services. Several additional programs also offer cervical cancer screenings and/or treatment. These numbers are very likely underestimates, as some programs have opted not to report service statistics, and not to specify the type of SRH or MNCH service they offer. 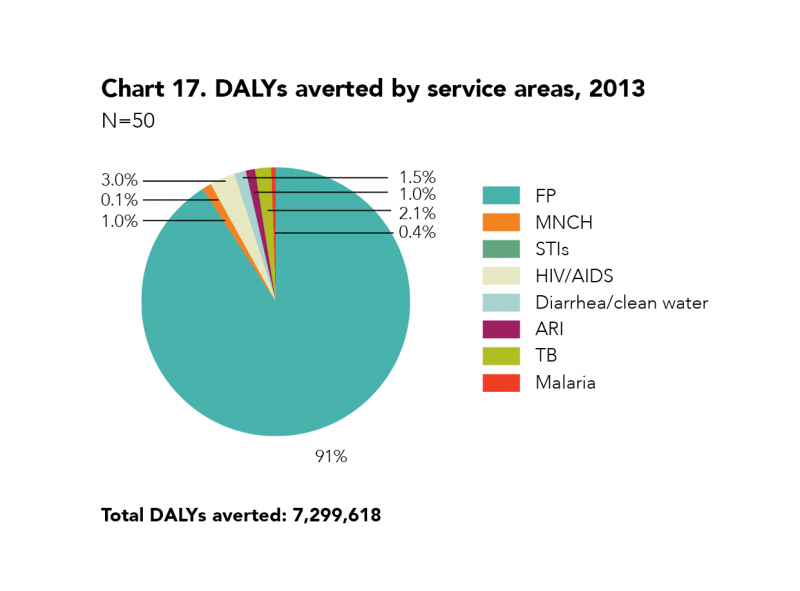 In total, more than 7 million disability adjusted life years (DALYs) were averted. This means that 7 million years of healthy life that could have been lost if the services were not provided, were not lost. This can be a complicated metric to understand, but it is sufficient to note that a large amount of morbidity and mortality was very likely avoided as a result of these services, and that family planning services contributed significantly to that impact. (See Chart 17.)

However, it is important to note that some health services offered by social franchises are not included in the DALY calculations, including safe delivery and post-natal care services, anti-retroviral therapy (ART) for AIDS, and a few other areas. Therefore, overall health impact is underestimated.

We also estimated health impact in terms of Couple Years of Protection (CYPs). CYPs, which only take into account the impact of family planning services, were calculated for 29 programs that reported family planning data from 2011 to 2013. BlueStar Madagascar contributed significantly to these calculations. Due to dramatic changes in the number of services BlueStar Madagascar reported in 2013 as compared to previous years, the aggregated trend in total number of CYPs decreased. However, when BlueStar Madagascar data is removed, we see an increase of 1,249,547 CYPs from 2012. And looking back to 2011, we see an increase of 2,644,594 CYPs to 2013, or about 53%! 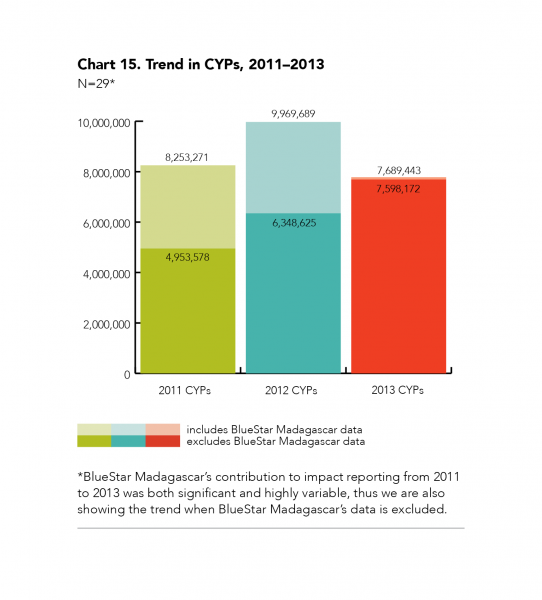 Clinical social franchising is notable not only for its adaptability to health service areas and its impact, it is also notable for its scalability.

The field of clinical social franchising is dynamic, and a number of programs are adopting new and context-specific approaches to financing their programs, partnering with the government, adapting technologies for program use, and encouraging demand for services. To learn more, download the Compendium. Also be sure to follow updates on the 2014 Global Conference on Social Franchising for Health, where a pre-conference session sponsored by the Department for International Development (DFID) will focus on franchise sustainability.

Note: This publication is intended as way to document and display descriptive data across programs. Outside of the area of health impact analysis, it does not venture to offer data interpretation or recommendations. Its strength also lies in the individual program profiles, which share details on the health services that were offered, the types of healthcare providers that were targeted for recruitment, the types of outlets those providers run, how financing of the program and healthcare costs is managed, how the program is organized, and how it checks for quality of clinical services. We encourage you to check out each of the individual profiles available in the Compendium.

Database at a Glance: Licensing and Accreditation