Catalysts for Change: Fourteen Hundred Hours in the Trenches of Urban Primary Care

How the Study Worked

We evaluated a representative sample of sixty two urban primary care health centers, covering all the thirteen districts and fifty six urban local bodies in the state. We used both quantitative and qualitative methods for our evaluation.

Our study had three key objectives. The first was to examine how care was being delivered at the existing urban primary care health centers and the quality of the care that was being delivered. The second objective was to study the management of the centers by the partner nongovernmental organizations. We wanted to understand how prepared these partner nongovernmental organizations were to change the way that they currently managed the health centers to become data centered, population based, and outcome oriented. Our third objective was to understand the existing gaps at the health centers. We also looked at inefficiencies in the design of the health system that might hamper the expansion of health services through the new National Urban Health Mission.

Life in the Trenches 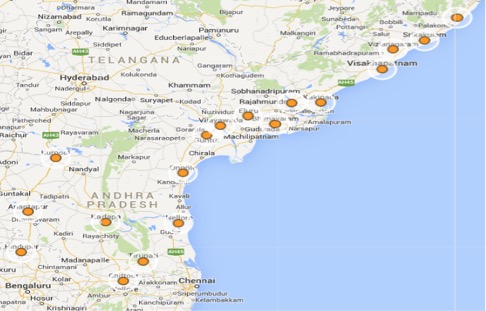 Right: Map showing the areas we visited as part of our assessment of urban primary care health centers in Andhra Pradesh.

Sixteen ACCESS Health teams completed the data collection and assessment in nine working days. We covered health centers all the way from a town at the northernmost point of the state called Palasa, on the border of Odisha, down to Hindupur, on the border with Karnataka. The distance between Palasa and Hindupur is more than thirteen hundred kilometers (more than eight hundred miles).

Our task was daunting. Our whole team showed tremendous commitment and grit. Our reception at the health centers we visited varied dramatically. The leader at one of the health centers near Vijayawada threatened our team with dire consequences if we reported the lack of available doctor at the center. Many health centers in Vijayawada had no doctors present when we visited. The centers occupied tiny rooms of no more than one hundred square feet. Another team covered seven towns and more than nine hundred kilometers (about 560 miles) by road in Anantapur district. Unlike our team in Vijayawada, this team was well received by the district medical and health officer and felt completely at home. In our assessment, we found that a particular doctor in one of the health centers had not been paid for eight months. 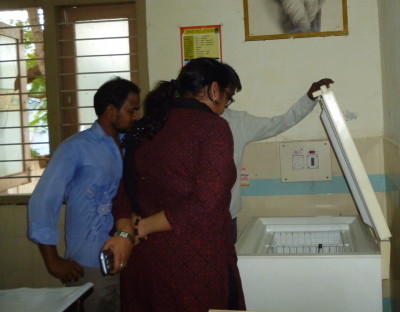 One of the best centers we visited was in the temple town of Srikalahsthi, in the Chittoor district. There, we were spellbound to find a patient centered system in place. Staff used state of the art electronic medical records for the fifteen thousand patients covered by the center. The nongovernmental organization that managed the center had created its own information technology platform. The center provided mobile devices to the doctor and the auxiliary nurse midwives (ANMs).

A bar graph shows the distribution of scores from the urban primary care health centers we evaluated in Andhra Pradesh. 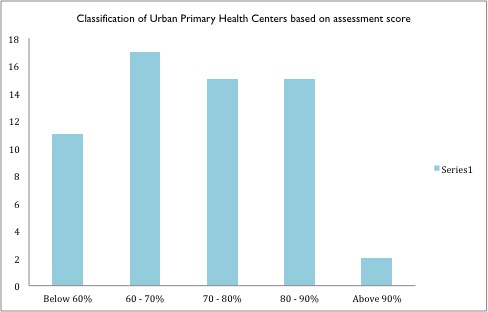 The majority of the centers we visited scored between sixty and seventy percent. Only two scored above ninety percent. Scores were based on a mixed methodology, the sum of both quantitative and qualitative tools.

In our assessment, we witnessed firsthand many of the issues mentioned in a 2007 report by the Indian Institute of Management, Ahmedabad. 1

We found that most staff and patients alike wanted a wider variety of health services to be offered at the centers. Staff reported payment delays of up to ten months. Delayed payment affected operations. Doctors’ salaries were below market rate, which made it difficult to retain them. We found that fraud was common, due to the lack of stringent tracking systems in the health centers. Staff rolls only existed on paper. Employees were not paid the correct amounts. Disbursement of salaries in cash via a self drawn check and submission of forged bills were common practices among health center staff.

The health centers did not have enough computers. As a result, the auxiliary nurse midwives spent extra time updating data in regional data centers. This time could have otherwise been spent on more productive activities, such as patient outreach. Employees of the organizations that manage the health centers felt undervalued. They saw their function as simply a means through which the government disbursed money. Staff in many of the centers lacked motivation.

Based on our evaluation, we concluded that current performance level of the health centers and partner organizations was inadequate to support the planned healthcare reform in Andhra Pradesh. The state needed a paradigm shift.

To accelerate change, the government looked to the private sector for expertise. The government reached out to key primary care innovators in the private sector that had developed successful patient centered models. Moving forward, ten percent of urban primary care health centers in the state will be run by these organizations as public private partnerships. These pilot primary health centers are “Catalysts for Change.” These centers will act as role models for other urban health centers throughout Andhra Pradesh.

We are serving as the technical advisor to the state. We are working to help build this model and to identify potential private innovators through our Center for Health Market Innovations network. As a part of the Catalysts for Change program, the Center for Health Market Innovations supported a workshop on best practices in primary healthcare. We will cover the outcomes of this workshop in the next blog in this series.

The Catalysts for Change program is an important step by the government of Andhra Pradesh. This experiment coincides with a significant shift in the public conversation on health systems. The presence of technology will further the transformation of urban primary healthcare.

Stay tuned to this series for more updates as the program unfolds!