This blog originally appeared on the Africa Capacity Alliance. Cross-posted with permission.

On Saturday the 23rd of January 2016, MOBicure (a Nigerian mhealth company) took its medical outreach series to Uselu market in Benin-City. The market, which is one of the largest open markets in Edo State, Nigeria with over 600 traders made up of predominantly women. The medical outreach was part of the OMOMI Reachout Project; which is a one year project consisting of a series of free medical outreaches for rural communities in Edo State, and is supported by the U.S. State Department.

Although the free medical outreach was slated for 9am that morning, as early as 7am scores of women had already gathered at the centre of the market waiting patiently and eagerly or the medical outreach to begin. The medical personnel consisting of doctors, nurses and other volunteers arrived at 8.30 am and the outreach began promptly at 9am. 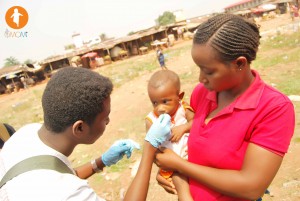 One of the market leaders present, Mrs Ajayi, lauded the efforts of MOBicure and its partners for bringing these free health services to the people. She said that due to the harsh economic realities of the present time in the country, most market women simply do not have the time or indeed the money to visit the hospital regularly to get themselves checked.

Co-founder of MOBicure, Dr Charles Akhimien stated that this had been one of the most successful medical outreaches in the OMOMI Reachout PROJECT series till date and that it further demonstrated the commitment of the company to bring healthcare to the fingertips of people, not just through mobile technology but through more grassroots initiatives such as these. At the outreach common ailments such as malaria were diagnosed and subsequently drugs were given free of charge. People were also afforded the opportunity to check their blood pressures, something that most of them had sadly never done before in their life time.

Present at the medical outreach was a delegation from the U.S. State Department led by Dehab Ghebreab, Public Affairs Officer of the U.S. Consulate Lagos, Nigeria. She and her team commented that they were impressed by the work MOBicure was doing in Edo State and they were further gladdened by the large turnout of women for the outreach. She offered words of encouragement to the MOBicure team and further stated that the U.S. State Department through the Office of Public Affairs of the U.S. Consulate Lagos was proud to support MOBicure.

The medical outreach which lasted till 4pm was also an opportunity to register women on the OMOMI SMS service, which is a

simple SMS short code service that provides timely, relevant and personalized health information for women right from pregnancy through child birth and beyond. A total of 86 women were registered to the SMS service on the day. The OMOMI medical outreach program series consists of fortnightly maternal and child health outreaches conducted in rural communities in Edo State, Nigeria, in order to render health services to never-before-reached areas as well as spread word of the life-saving OMOMI SMS service to mothers.

This blog was written by Charles Akhimien Co-founder, MOBicure

Behind the $24 million pledge for health innovations in Nigeria