The program trains peer educators and has established health clubs that have increased awareness of HIV/AIDS prevention with over 20,000 children at 27 schools. One of the clubs, called Kahuho Health Club, was started in 2004. It meets once a week as a forum for young people to discuss the issues that affect them, like teenage pregnancy, drugs, the threat of HIV and other obstacles to their long term education. Members join in Year 1 at the age of around 14 or 15 and take part in the club's activities until they leave school aged 18 or 19. The club interacts with nearby primary and secondary schools, performing plays and telling stories which highlight the social dangers that young people can be exposed to.

Many of the clubs have shown important results. More than half of all students surveyed in participating schools are able to name three ways in which to prevent HIV. The rate of teenage pregnancy within the school served by the Kahuho Health Club has dropped dramatically since the club was established, with Kahuho losing just two students over the last two years.

RxGen model works with young people to reduce their risk of unintended pregnancy and sexually transmitted infections by making it easier for them to get the health information and products they need. Their point of contact is the pharmacy, which is more accessible than a health care clinic.
Learn more 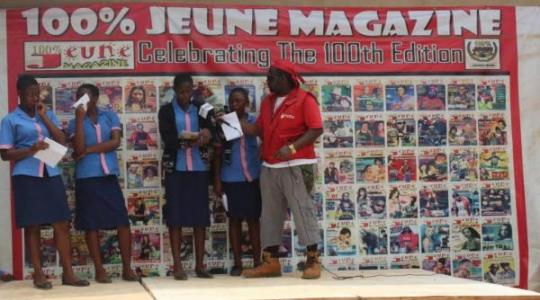 100% Jeune is a not-for-profit program that uses media and interpersonal communications to promote the reduction of risk-taking behavior among youth.
Learn more